What do these cult-classic heroes all have in common? Kick-ass origin stories.

The same goes for marketers. It’s fascinating to learn how the marketing heroes of today became the pros we all know, love, and aspire to be.

What’s his secret? How can you bring a bit of Daniel into your efforts? First, let’s set the scene for our marketing hero’s journey.

After more than 20 years in the business, independence still matters for CD Baby. That means anyone can use their service—from Grammy-winning artists to newbies who recorded a song on their laptop.

Artists upload their music, send all the metadata required for proper tracking and payment, and the rest happens on the CD Baby portal.

That’s our “why.” To be independent ourselves, and then also to allow independent musicians to capitalize on their art the way that they want, and retain ownership of their music without the backing of a label.

In 2019, CD Baby was home to more than 650,000 artists and made nine million tracks available to over 100 digital services and platforms worldwide. Rock on! 🤘

The Call to Adventure: Rise of the Strategic Marketer

Daniel joined CD Baby about three years ago after working as a healthcare and retail marketer. In his current role as a digital marketing strategist, he’s in charge of SEO, SEM, and PPC. Key achievements in his tenure at CD Baby include an ambitious project to translate the website’s blog into three different languages: English, Spanish, and Brazillian Portuguese. Says Daniel: “We’re really focused on educating our clients, and that means making information free and accessible.”

As a result, CD Baby saw an increase in traffic upwards of 30%. The next step was to advance the paid search strategy, leading to an increase in the overall conversion rate by 40-50%.

Of course, as in any hero’s journey, there’s always a mentor involved.

I once had a teacher who would always instruct us to ‘answer the question I asked and not the one you wish I had asked.’ Marketers who properly segment their audiences know the value of this lesson: You’ll get the results you want if you give customers the experience they need and ask for.

What makes CD Baby’s marketing team unique—and Daniel’s results so impressive—is that they speak to audiences in different geographic locations, in other languages, and at various stages of the buying process.

It’s very complicated, and I’ve already lost all my hair thinking about it. It’s unlike any company I’ve worked for or seen—you really have multiple different user intents for every time you want to sell the product. The retention (time) for any of our artists can sometimes be several years, and depending on what they’re releasing and how profitable it is, the lead time can be very different.

CD Baby’s marketing team consists of about 15 people, including a social media strategist, a creative team, and an international sub-team. “The main KPIs we’re looking at are traffic, lead generation, new accounts, and then ultimately revenue from ecommerce transactions.”

Landing pages have been a key ally in this challenging landscape. Daniel is constantly optimizing CD Baby’s pages to bring in big results.

Landing pages allow you to diversify and scale your messaging, so you can have custom conversations with specific audiences. There’s really no better way to segment your messaging for your ads, especially for lead generation or SaaS campaigns. Websites are fundamental, but it can be hard to formulate a perfect sales pitch that will appeal to every prospect.

As a search engine marketer, Daniel’s go-to question when putting together a campaign is always, “What’s the answer that will best satisfy the user’s query?”

Our best-performing landing pages have an extremely specific niche audience, with a specific service we’re offering. While that can make it extremely difficult to identify the right audience when targeting our ads, we get fabulous ROI when we match our message to the audience.

One of his most successful campaigns has been running for the past six months, with a stable conversion rate of 37.17%. Meanwhile, the median conversion rate for ecommerce and SaaS landing pages—CD Baby operates in both industries—are 3% and 5.2%, respectively.

Have a look at the campaign in question:

Aside from covering all the landing page basics, what makes this campaign so successful? Is there maybe something more to it than meets the eye?

What truly makes this specific campaign sing is that Daniel’s expert knowledge of targeting, segmenting, and message match is combined with a secret weapon: artificial intelligence.

Using Smart Traffic—an AI-enabled Unbounce tool that actively learns about visitors’ preferences—prospects are automagically sent to the landing page variant where they’re most likely to convert.

Daniel explains this specific campaign was created for branded searches and designed for people who might know the name “CD Baby” but aren’t sure it’s the right match for them. “I figured some people want the first thing they see on the page to be how they’ll be monetized, while others would want to see social proof.”

What makes a great landing page variant? Honestly, literally anything. Change colors, text, design—the builder is your oyster! Here are a few ways to get inspired with variant creation.

Although super chuffed with the campaign—especially how he hasn’t needed to optimize it in months and its conversion rate is still soaring—Daniel had a moment of hesitation before turning on Smart Traffic. “At first, I was a bit afraid of letting go of the reins. But then I closed my eyes and accepted it. There’s really some stages of grief going on there.”

He realized AI was already an active element in many of the tools he uses, making his day-to-day role much easier. And at the end of the day, the results speak for themselves.

It’s really impossible not to see AI’s impact on marketing. Practically speaking, I see it less as the advent of new tools for marketers to master and more a revision of what it means to be a channel owner. Because of AI, we’re starting to trade our responsibility for mundane tasks for more strategic, directorial duties. In a way, it means we have to stop thinking of our tools as tools and start thinking of them as employees that we trust to do their jobs.

What Daniel’s describing actually has a name: conversion intelligence. It’s combining a marketer’s know-how with the power of machine learning. By allowing Smart Traffic to do the heavy lifting of sending the right visitor to the right variant, Daniel gets higher conversion rates, deeper insights into the needs of his audience, and more time to focus on other initiatives—win-win-win!

Looking to optimize your landing page campaigns to see killer conversion rates too? Well then, step right up! Daniel’s optimization philosophy isn’t about tinkering as much as it is about asking questions to try to understand his audience continuously.

What does that look like in practice? Here’s his 4-step process for effective landing page optimization:

Real thought leaders will validate their decisions, repeat the results when they’re positive, and learn from them when they’re unsuccessful. That’s the heart of a strategic mindset.

Looking to the Future (and a Possible Sequel?)

What makes Daniel’s feats so much fun to follow is that he’s a fearless marketer. Open to new tools and new ways of working by incorporating AI into his ecosystem, he’s not only bringing his campaigns into the future but also reaping incredible results.

We all know there are no silver bullets out there, and that marketing is too volatile a trade to stay in one position. There’s no guarantee that the techniques you’re comfortable with will survive the next wave of innovation.

But the real inspiration is that Daniel isn’t the only hero-marketer out there. If you’ve watched enough movies in the fantasy-adventure genre, you’d know the common message is: “Anyone can be a hero.”

All it takes is courage, curiosity, and a few trials to bring home the big prize. 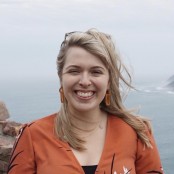 Carla is a writer, creator, and serial editor. (She's also very proud of her mastery of the Oxford comma.) Having once taken an etymology class, she's a fervent believer that the plural form of "octopus" is octopodes, and will fight anyone that says differently.
» More blog posts by Carla Lynn

Take the Builder for a Spin

Get an interactive preview of the Unbounce Builder—no signup needed.

Get full feature access to any plan with a 14-day trial. Create and publish as many pages as you like and cancel anytime, no questions asked.